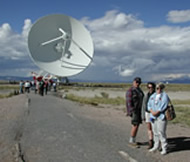 The Project Letha Radio Astronomy Observatory is dedicated to continuing the education legacy of Letha Keyes, a teacher of talented and gifted school children. Letha spent 20 years teaching at numerous schools in Clackamas County, Oregon from the mid 1970s until her retirement in 1993. She taught primarily mathematics and science, with many of her class lessons devised by her.

Letha Keyes passed away in 2008, succumbing to breast cancer, which she had fought for over 15 years.

In her memory, her husband Richard, conceived the idea of building a radio astronomy observatory. This observatory is intended to have teaching radio telescopes, available to students who would most likely never be able to gain access to such a scientific instrument without being in a graduate level university program.

We have completed our initial plan to construct a telescope following NASA’s Radio Jove, which is designed to receive radio signals from Jupiter or our Sun. This telescope is located in the countryside of Klickitat County, Washington. There were several design concerns, such as gaining internet access for the site, that need to be solved for the successful completion of this initial phase of the Project Letha Radio Astronomy Observatory.

After the initial phase has been completed, the goal of constructing a dish-style radio telescope capable of operation at 21 centimeters will begin.